A great ad gets the intended message across...nothing more, nothing less

A few weeks ago The Guardian published their list of the best TV ads of the last 10 years. Naturally, it was a subjective list with a mixture of simplicity, trendsetters, beauty and humour (I'll leave that unedited; Christ, I just looked at what I wrote and it looks like I'm a bloody evangelist for the industry. Horrible). Many are memorable pieces of creative work. Many have inspired thousands of pub conversations. Many have won prestigious awards. But how many of them sold anything? Well, I imagine most of them did. But was it in the way they intended? More generally, how many got across the message that they were trying to convey?

A case in point is the Guinness ad. It conveys the idea of going backwards in time well enough, and has a catchy tune and a cute lizard at the end but...does it get the message across that Guinness is worth waiting for? I'd say not. Incidentally, I was hauled in off the street to an ad testing market research session. I told the at the time it was crap - but at least they listened to my impassioned plea not to use some godawful cliched bongo-heavy generic pan-African music, which (I wrote) conformed to a stereotype of ape-men roaming Africa (sorry, but the animated versions shown to us in the testing were really dire).

There are some decent ads in the Guardian's list and some mediocre ones but for me only the John Smith's ads, by TBWA, stand out - the simplicity and humour supporting a strong concept and strapline. W&K's beautiful creation for Honda was bound to create a lot of buzz (it did) and it a lovely creative piece too. Without that word of mouth factor, though, it would be ordinary. My own favourites of the decade, however, are not featured in that list.

I have three ads in particular that stand out. The first is a print ad from this autumn: 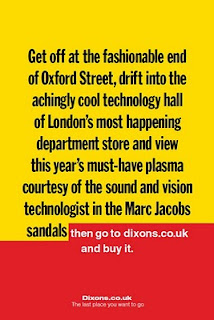 This ad, created by M&C Saatchi, is brilliant because the POINT of the message is brought across in such a powerful way. It's risky, it's cheeky, it's self-deprecating, but you "get it" straight away.

Comparing Dixons to Selfridges? John Lewis? Harrods? It's brilliant. It's the same principle that Ikea and Richer Sounds are built upon: our products are just as good as anyone else's, but we cut corners to cut prices. Nowhere is this message better spelled out than here. The point is got across vividly - Ryanair style. We are cheaper.


My favourite ad of the decade - possibly my favourite ever. It's set up in true cinematic style, beautifully shot, etc etc. But none of that matters. What matters is that purely as a result of this ad, I find it impossible to think of the word "distilled" without instantly thinking "Smirnoff". JWT have earned their money on this one.

It's a simple advertising trick, but one that's so powerful: create a strapline, or even just a keyword, with which you want the product to be forever associated; then create an analogy, metaphor or pun to make the association. What's so great about "Love" is that throughout you're thinking what's the message here? And what are they trying to advertise? Then you think taking away the bad bits...sanitising...leaving only the sweet, demure original...AHHHHHH TRIPLE DISTILLED FOR PURITY. Then to hit you with the product, with which they're trying to associate exactly that message: brilliant. Just brilliant. Utter smackdown. Throw in the fact that it's a really, really sexy ad as a bonus, and it all ads up to one of the best bits of communication ever.

I'll leave Paul van Veenendaal's ViralBlog to discuss the viral aspect of the marketing campaign for this road safety ad, but how brilliant is it as a creative piece of work? In exactly the same way as the Smirnoff ad, WCRS's "Do the test" takes a strapline and builds a fantastic metaphor around it. Then hits you in the stomach at the end with the strapline and "product". Again - smackdown. I was left reeling. The simple analogy is inescapable. You feel guilty. In fact, by missing the bear, you almost feel like you've killed a cyclist yourself.

Oh, and I still haven't met anyone who spotted the bear first time round. So it's doubly brilliant.
at 00:32 No comments:
Email ThisBlogThis!Share to TwitterShare to FacebookShare to Pinterest
Labels: branding/advertising, My Favorite Things
Newer Posts Older Posts Home
Subscribe to: Posts (Atom)