For several weeks I've been making painfully slow progress through Francesco Nicosia's classic work from the 60s, Consumer Decision Processes. It's an academic work in a field where I have no formal training, so I'll forgive myself the slowness, although to be fair my eyes occasionally glaze over when reading it on the Overground after a long day at work.

I've still got a long way to go on it (estimated finish time: 2013) but although it's not always edge of the seat stuff (by page 80 the reader has just been informed that a decision starts with a goal and ends with an act) it is a carefully constructed breakdown of how decisions might work. Nicosia reviews the existing literature but it was the ideas of Paul Lazarsfeld that grabbed me.

Lazarsfeld's scheme, from 1935, basically postulates that at time T you have an individual with feelings or situations I(T) in his environment E(T). The environment acts on those feelings and situations, and helps shape them in turn. Of course, only relevant environmental concerns will have any effect on the individual.

For example, E could be anything from some word of mouth, to a change in personal circumstances, to an ad, to a change in product availability, to an event, to a product attribute. So E feeds into I, which in turn is changed, so another "set" of environmental variables will come into play, and so on in a constant iterative process, until the individual preferences reach a critical point leading to some tangible action, and the decision is made. It sounds lovely and simple, but the key point is that all these variables play off one another; so one particular variable will only have an effect on, or be relevant to, another variable depending on what stage of the process you are at.

I feel the marketing implications of this scheme are clear. Imagine first the universe of individual variables (circumstances, opinions and so forth), alongside the universe of environmental variables. The trick is to draw up some sort of infinite Venn diagram, and work out which variables interact with which other variables, and under what circumstances. The marketeer can then consider which of those variables he has control of, and apply them at the appropriate point in the decision process. But the hard bit is realising that each individual circumstance will be different; so are there patterns, or general rules, that can be drawn - and indeed are the decisions that are being taken to purchase the product in question the same or different?

Of course the environmental variables such as product attributes themselves are not constants; because it's the subjective opinion on product benefits that matters. Which neatly ties in with what Ward Edwards and others were looking at in the 50s (my progress through Nicosia is supersonic compared to the rate I'm reading Amos Tversky-edited Decision Making!) I won't pretend to know anything at all about microeconomic theory, but the key to "utility curves", marginal utility and a value-to-cost ratio is that the value or utility of a product is subjective. Even something like price is subjective; the perceived cost is more important than the actual cost when it comes to decision making.
at 00:13 No comments:
Email ThisBlogThis!Share to TwitterShare to FacebookShare to Pinterest
Labels: branding/advertising, human behaviour, market research

This won't be another pro-Android evangelical outpouring. However, since having picked up my Desire HD I've capitulated and purchased an all-singing, all-dancing Spotify subscription and I'm determined to get value out of it. With that in mind, I've been putting plenty of aural goodness in ma lugs.

Currently big in my headphones:

Beach House - "Walk In The Park". We've been canning the album at work for the last few months and it's a big winner chez Eoghan. The blissed-out, afterclub, post-rave "Walk In The Park" is the best if the lot.

Bach - The Well Tempered Clavier. Spotify isn't ideal for classical music, as it's not filed consistently; so you get plenty if rubbish recordings mixed in with the good ones. I've done searches for "guaranteed winners", and Daniel Barenboim naturally falls into that category. I've listened to Bach's epic several times over in recent days.

Serge Gainsbourg & Brigitte Bardot - "Bonnie & Clyde". Obvious, maybe, but what a winner (am I falling for Sheenmania?) Getting played LOUD.

Freddie Hubbard - "Suite Sioux". The whole Red Clay LP is ace but this understated masterpiece trumps the true track as the standout highlight for me. It's all very low key, but Herbie Hancock's Rhodes and Lenny White's subtly brilliant drums form a platform for Hubbard. It's a perennial Eoghan favourite and I'm enjoying revisiting it.

Jane Bunnett - "Descarga a la Hindemith". I love Jane Bunnett, descargas and Hindemith, so its just as well this tune lives up to its name. Talking of jazz tunes influenced by 20th century eastern European composers...

Larry Young - "Zoltan". Based on a theme of Kodaly, this opens up into a driving modal killer. Solid.

Hindemith - 5 Pieces for Strings, op 44. Like so much of the best music, these were written for students. Firmly neoclassical in feel but smothered in harmonies that can only be Hindemith.

Stefon Harris - "Summertime". This brilliant jazzer can do no wrong, strictly for the heads, and I'm caning all his albums at the moment thanks to Spotify. "Blackout" (from the album of the same name) is an urgent, arresting killer but from the same album check out one of the best versions of the Gershwin chestnut you'll hear anywhere.

Ed Lincoln - "Catedral". The self-titled LP reissued by Whatmusic a few years ago is one of my all time favourites and it's getting rinsed repeatedly at the moment. Every tune is essential but "Catedral" is getting a real revival with me at the moment.

Grant Green - "Future Feature". Feel the funk! This is another instant winner, a little light to begin with but it opens out into full blown catchy big band jazz funk. Ace! Also getting heavy rotation (if that's the correct term with Spotify...) is "Let The Music Take Your Mind" from the Alive! LP, which is an instrumental funk blast.

Dorian Concept - "Tropical Hands". Electro heaven. On the flipside of the Trilingual Sex Experience" 12", this one's even better. The sorts of noises kids make between their teeth imitating a kazoo, with delicious midtempo beats lathered over the top. Big.

Mozart - Piano Concerto no 25. The late Mozart piano Concertos are getting a lot of airplay with mne at the moment simply because they represent perfect musical form. Not a note is wasted throughout, and while they spring few surprises, they show music "as it should sound". Don't get me wrong, I still love playing a load of Messiaen or Stravinsky, but if you want the classical format demonstrated in its purest, most perfect way, then this is where it's at. The jazz equivalent would probably be...

John Coltrane - "My Favorite Things". Why is this such a stone-cold classic? Is it the languid pace? The tuning fork purity of Coltrane's soprano solo? The understated brilliance of McCoy Tyner's extended outpouring of modal progressions based on the theme - one of the most enjoyable solos ever? The perfect balance and simplicity of the ensemble work? The answer, of course, is all of the above.

Shit Robot - Simple Things (Work It Out) (Todd Terje remix). Like the Beach House album, Shit Robot's From The Cradle To The Rave has been played a lot at work and the album sounds really fresh. Best of all, though, is Terje's thumping house remix of "Simple Things" which just builds, and builds, and builds...

George Benson - "My Latin Brother". Surely Benson's finest moment. Wicked drums, rhythm guitar and cello form a backdrop for Benson to cut loose for a solo of the highest calibre. It was surely this solo which Masters At Work hoped to replicate when they hired Benson to play on "You Can Do It (Baby)". I only knew the tune from a scratchy edited 7" version. The LP version is miles better.

Honor Blackman - "Men Will Deceive You". No, really. Utterly fantastic song from Honor. Also check out the version of this performed by Brady over the reggae sounds of Serge Gainsbourg's classic "Javanaise Remake", which is great in its own right. But Honor's original lick takes some beating.


Di Maggio - "Madame X". I heard this on French Radio London (does what it says on the tin...the music is nearly as good as Radio Nova) and it's brilliant. The album is worth checking out; in "Madame X" Mahlerian strings give way to an achingly lovely, deep track, with spoken vocals. Love it.
at 20:35 No comments:
Email ThisBlogThis!Share to TwitterShare to FacebookShare to Pinterest
Labels: music, My Favorite Things

I was pretty hacked off that two supermarkets and three health food stores between them couldn't muster a bag of buckwheat flour, but consoled myself with vast quantities of crepes. And you can't beat a classic ham-based filling for a crepe.

Easy really: make a bechemel sauce, saute an onion and some sliced mushrooms, grate some gruyere, and add the cheese, onions and 'shrooms to the sauce. Make the crepes, keep them warm, put two thin slices of ham on each and smear liberally with the sauce. Then whack them in a hot oven for a few minutes. 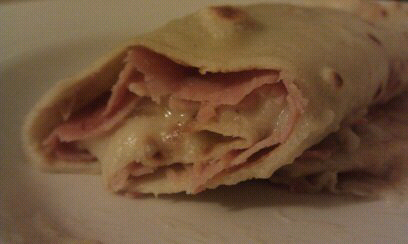