Hamlet (RSC, dir Gregory Doran, Novello Theatre) **
Waiting for Godot (Theatre Royal Haymarket, dir Sean Mathias) *****
Hamlet (Donmar Warehouse productions, dir Michael Grandage, Wyndham’s Theatre) ****
2009 has been the year of the classic megaproduction. Rarely can there have been so much anticipation surrounding a Hamlet, let alone a Godot. Would the productions themselves withstand such hype and scrutiny? 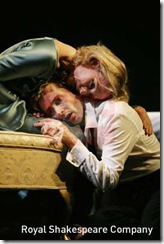 The RSC Hamlet (**) , perhaps better known as the David tennant Hamlet, was perhaps the most eagerly anticipated Shakespeare production EVER – certainly in my lifetime. Tickets sold out for the entire London run in a matter of hours. As a result, I found myself queuing one freezing January morning at 5am on Aldwych, for one of the day seats that were held back.
Queuing for returns and day seats is a particularly British pastime and one which always brings the same characters together, time after time. There was the woman at the front, with picnic hamper and shooting stick, who had sat on her own for four hours until the second person in line arrived. There was the bright American student, who prattled on, brightly, about nothing in particular in a loud voice which had just the right tone to pierce whatever defences I attempted to put up as I made manful efforts to sleep on my haunches. It was an incessant noise and I would have pleaded manslaughter on the grounds of both self defence and diminished responsibility. There was the silent, anorexic male, reading Dostoyevsky. There was the matronly type, offering tea and sandwiches to all around her. There was the plummy type in her sixties, who discussed all things theatrical with her neighbours, until at one point she came out with “Oh reaaaaaly? What an absolute fucking bastard.”
Workers, clubbers and homeless alike looked on, wondering why such a motley crew of middle class (mostly) fiftysomethings would sit in freezing drizzle at the crack of dawn. There is little to keep one amused. Sandwich delivery vans, all from firms with punnish monikers (“The Well Bread Sandwich” and the like), provided the bulk of the entertainment. Apart from that it is a long, hard slog to 10am.
These were the hottest tickets in town. Seeing the Doctor Who Hamlet was like getting tickets to the Governor’s Ball after the Oscars. This was real deal gold-dust business. But what of the performance itself? On paper it was an embarrassment of riches. Not just Tennant, but Patrick Stewart too; and the kitemark of an RSC production. Surely nothing could go wrong.
Personally, I was sorely disappointed, but it must be said that I was in the minority. First things first, let’s get Tennant out of the way. He hammed everything up, he leapt and gurned, contorting his face in his trademark way. He was never Hamlet; he was always David Tennant doing Hamlet. He has the misfortune of a very distinctive style, and thus it is always hard to shake off the feeling of watching the actor rather than the part. He was not helped by a production that attempted to inject humour at the most inappropriate places while missing obvious jokes in the text; as a result, is had a disjointed, uncomfortable feel, while making Tennant look as if he was going for cheap laughs half the time. The second half picked up well as the action intensified, but I still came away slightly short-changed (as the day seats were a fiver, perhaps an inappropriate choice of phrase).
The supporting cast were mixed. Patrick Stewart, as the Ghost and Claudius, was understated and had suitable grandeur without being spectacular. Penny Downie as Gertrude was majestic; she was terrifyingly powerful and the bedroom scene with Hamlet was electric. Also of particular note was Edward Bennett as Laertes.
As soon as word went around that the two veteran giants of the Shakespeare-Hollywood crossover, Patrick Stewart and Ian McKellen, were joining forces to do Waiting for Godot (*****), there was only one word in my head: unmissable. Of course, like the rest of the world I had seen them together for a few fleeting moments in the X Men films, and despite the CGI that was enough to make me realise that the two of them had the potential to create something very, very special together.
Never having seen Godot before, I went with a light heart: I knew that it might well be something that I wouldn’t enjoy, but I also knew that if these two couldn’t make it work, then it could simply be written off as a piece for which I don’t have the intellectual capacity.
McKellen and Stewart were, simply brilliant by virtue of the fact that they managed to put the real star of the show to the fore: Beckett himself. Their considerable acting skills and Sean Mathias’ directing ensured that far from being a play consisting 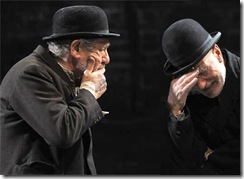 of two old men talking about nothing, it became a wonderfully uplifting journey through static  - or cyclical, depending on which way you look at it – time. Simon Callow’s brutal and grotesque Pozzo provided horror and light relief in equal quantities, while the bizarre Lucky (Ronald Pickup) was distressing to watch. As for the leads themselves: they eked humour out of every line. It was a production full of pathos, but ultimately uplifting: two men in the twilight of their lives, watching time tick by, but making the most of every second of their lives by enjoying each other’s company. A better depiction of friendship I have never seen before. The production also seemed to emphasise just how Irish the play is: men talking about nothing, for days on end, and yet remaining  stoically upbeat about the future (with lashings of healthy cynicism thrown in). The best was left until last: the vaudeville curtain call, with bowler hats the stars of the show, was a wonderful way to leave this magnificent production.
Michael Grandage is without doubt the director du jour and having seen his Donmar-on-West-End-residency productions of Ivanov and Twelfth Night, as well as his superb Othello last year, I had high hopes for his Hamlet (****). For those who hadn’t been to the RSC version, there was a feeling of going off to Bristol University having missed out on Cambridge: probably a decent experience, but not the unforgettable, lifechanging affair that seeing David Tennant might have been.
By contrast to the RSC’s patchy effort, this 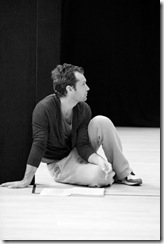 was a simpler affair: a Jude Law tour de force. Law, a much underrated Hollywood actor in my opinion (his performance in Closer is the highlight of a superb film), covered a vast range of emotions and philosophies throughout, but always emphasising the confusion and self-doubt that the Prince feels. Whether berating those around him for their moral flimsiness or demonstrating Shakespeare’s exquisite existentialist soliloquies, Law engaged with the audience from the word go and never let up.
It occurred to me that perhaps Law was projecting a little of himself into the part; he has always been an enigma, with rumours of a cold heart where women are concerned and just the other day was pictured lashing out at a photographer. I wondered if he had managed to put himself not only in Hamlet’s shoes, but in his mind as well.
The production was based purely around highlighting the Prince’s inner turmoil. Action and humour were downplayed – indeed, this was a bleak, almost elegiac performance at times. Some of the action was inadequate; there was not enough tension towards the end (partly because Law’s titanic philosophical effort in the first half had been so exhausting) and of the supporting cast, only Matt Ryan as Horatio was convincing, providing a strident foil to Law for Hamlet at his most positive: in true Love.
at 23:09 No comments:
Email ThisBlogThis!Share to TwitterShare to FacebookShare to Pinterest
Labels: London, reviews, theatre
Newer Posts Older Posts Home
Subscribe to: Posts (Atom)