There's something magical about early mornings.

On a whim I decided to get up early this morning (Sunday) for a run. The alarm went off at 0545, and half an hour later I was cycling in the direction of Hampstead Heath, with the intention of catching the sunrise from Parliament Hill (or wherever there was a decent view).

I ended up locking my bike up on Hampstead Lane about halfway between the Spaniards Inn and Highgate Village. Trail running shoes on, Camelbak and helmet in my bag and away I went in no particular direction.

Although I attempted to track my progress via MapMyRun, the GPS on my phone failed and the app managed to discard everything it had recorded, so I don't know where I went although I criss-crossed my path all over the place. 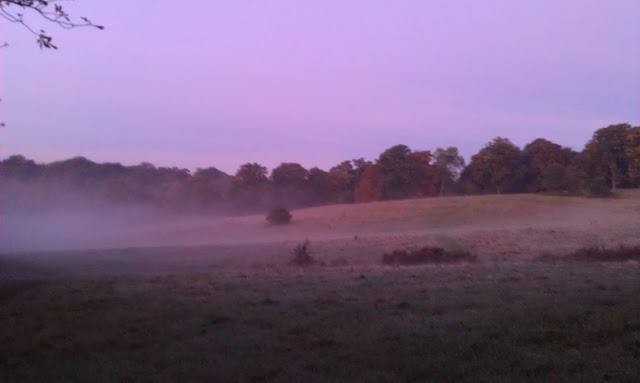 There was a mist rising off the ground - quite extraordinary. 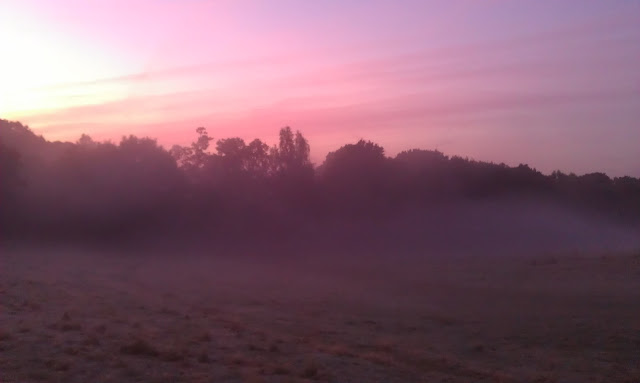 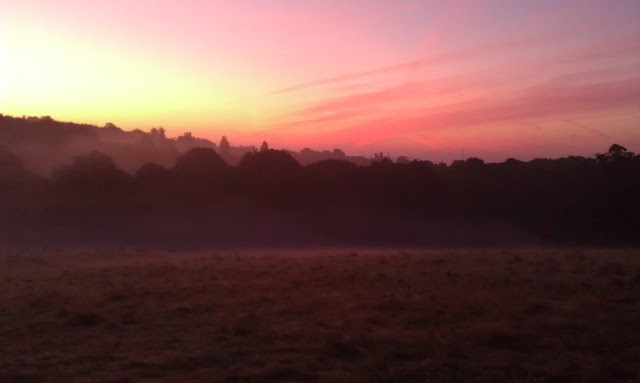 Above: looking out over London (you can just about see the Shard). 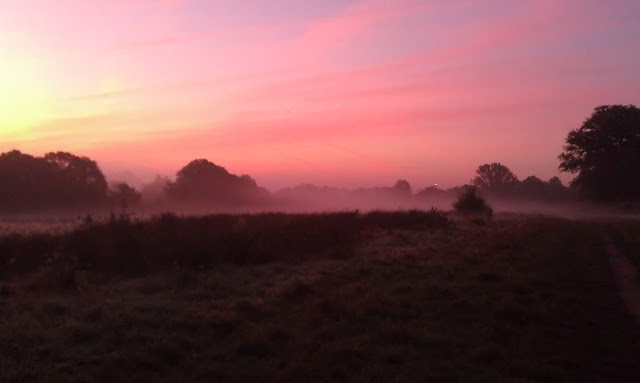 The heath was almost deserted. I met the occasional dog walker and runner - and after about half 7 when the sun was up, it started to get busier. But for the most part around sunrise, I had the whole place to myself. 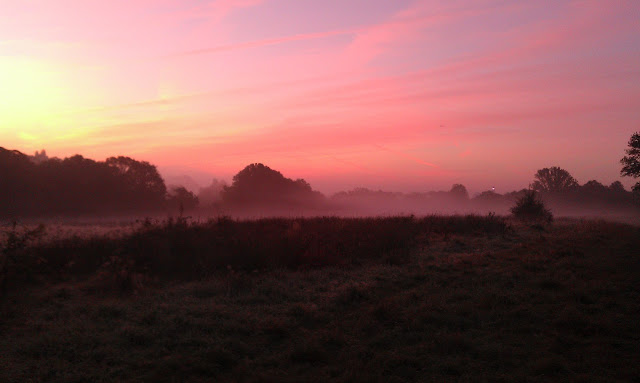 The camera on my phone doesn't deal at all well with poor light, but these give a sense of how things were. 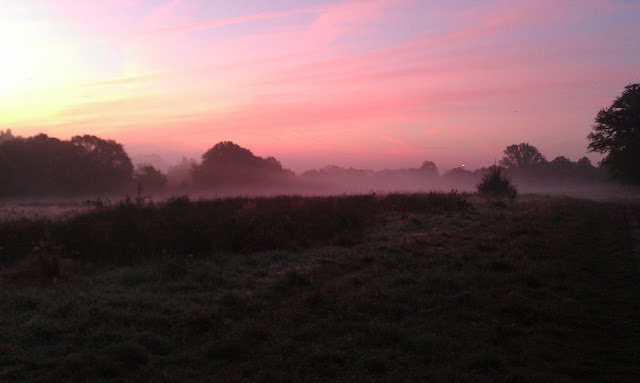 This tree (below) was pretty spooky: 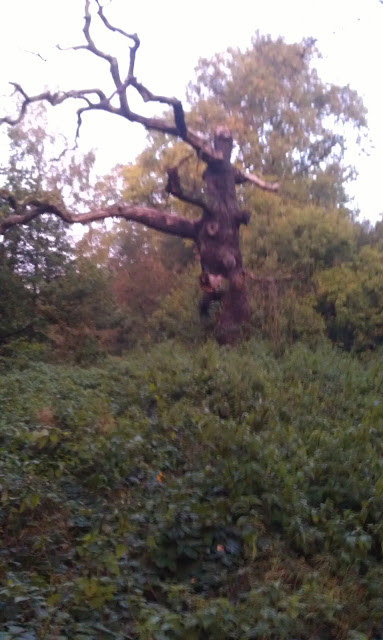 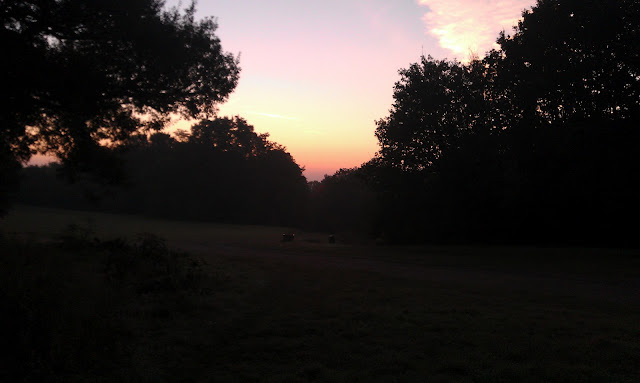 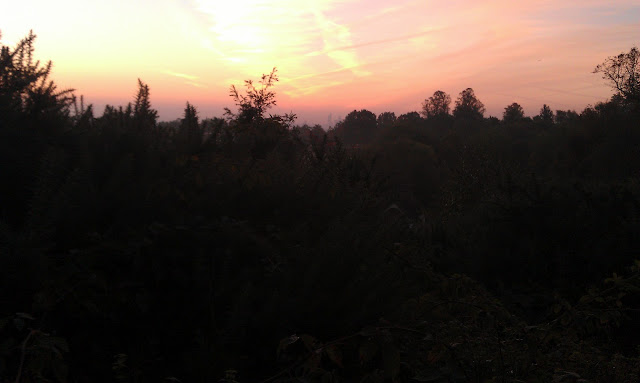 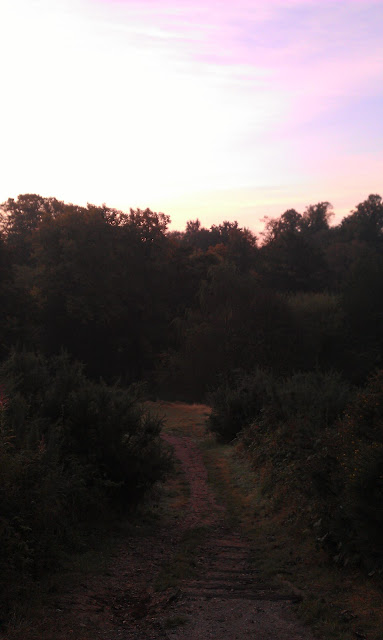 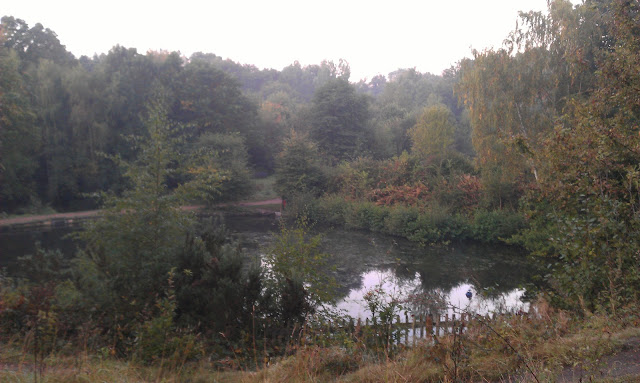 I shared the space with plenty of foxes - and a rabbit: 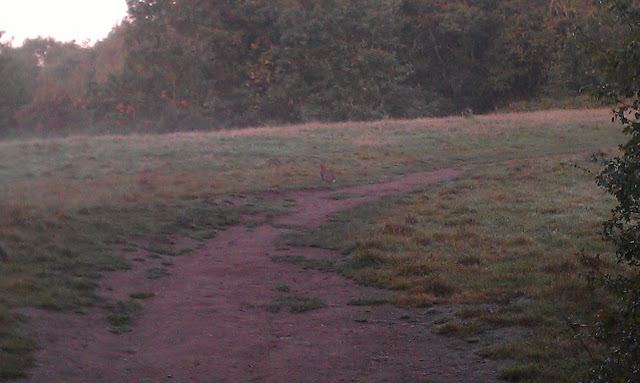 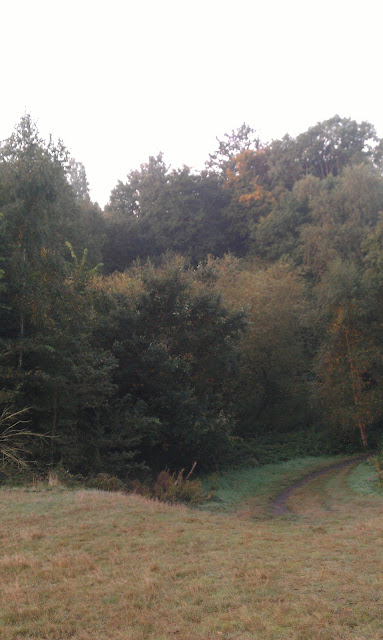 It was an extraordinary experience - pretty spiritual. I kept on saying "oh wow" to myself - and congratulating myself on the decision. 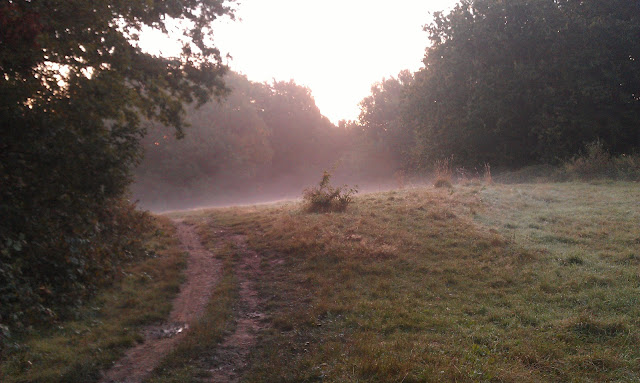 And then, at around a quarter past seven... 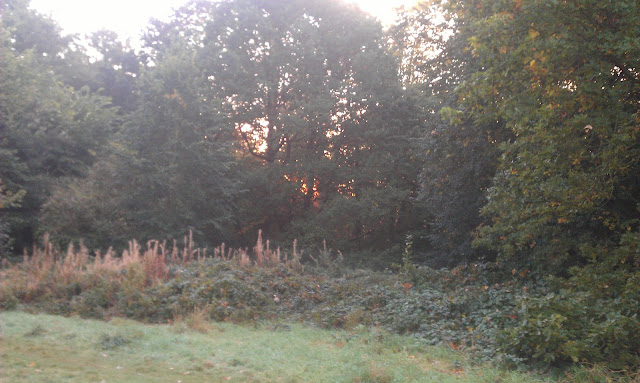 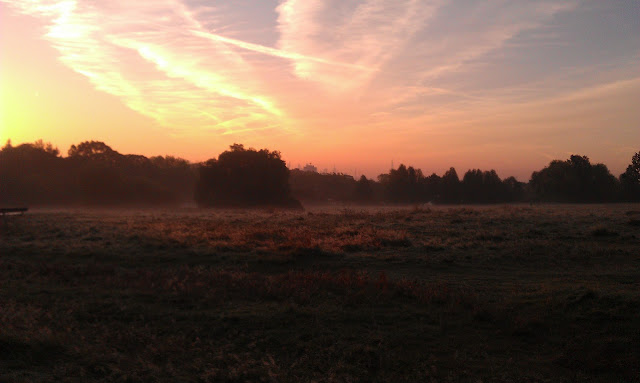 I could feel the spirit of Nina Simone in the air... 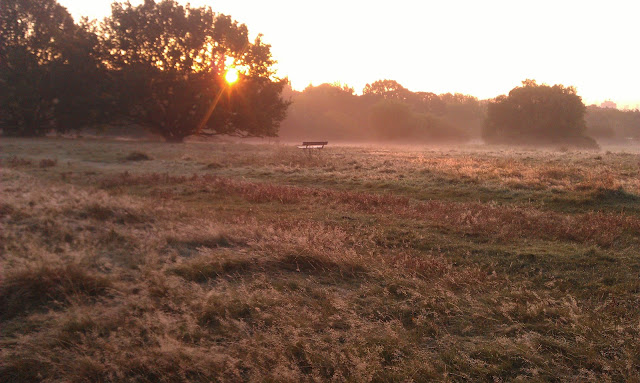 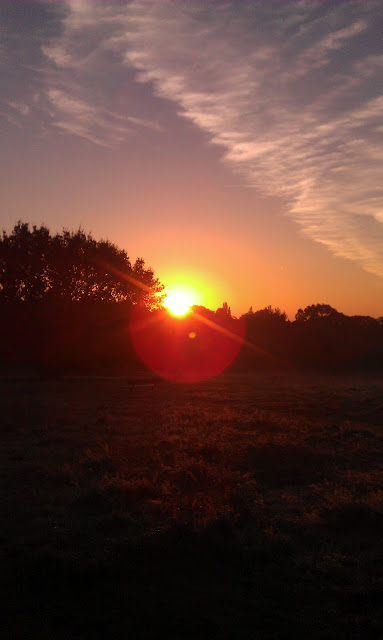 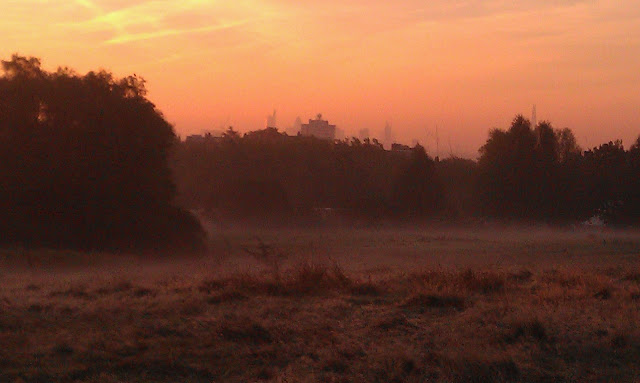 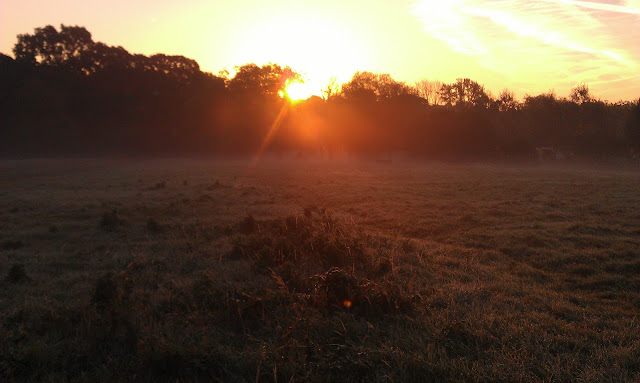 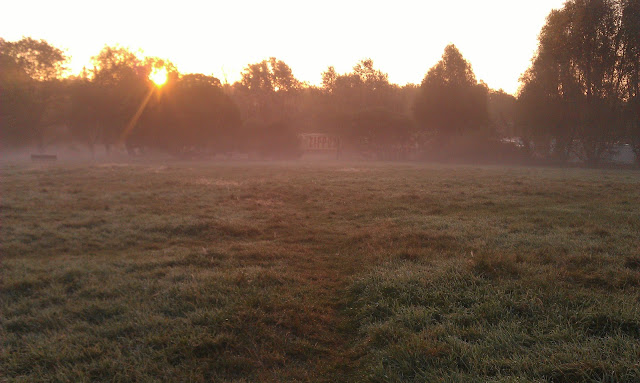 Above: yes along with the rabbits and foxes that is a lesser spotted circus. 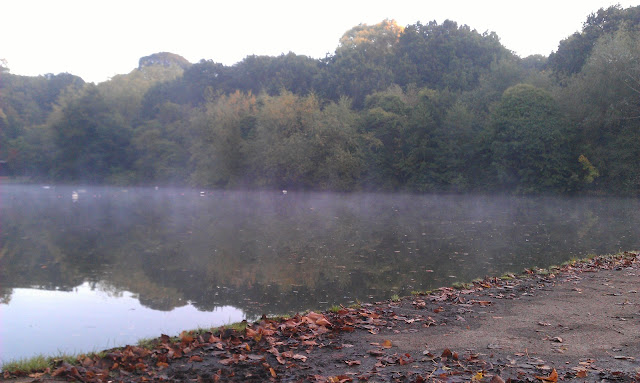 The mist/steam rising from the ponds was pretty magical. 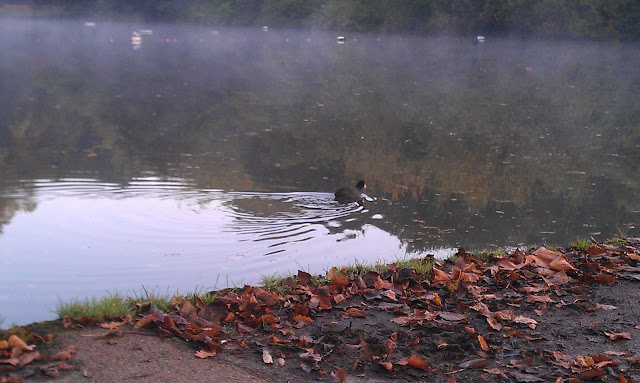 For some reason mainly that I didn't really care where I was going and kept changing direction randomly, it took me ages to find Parliament Hill. When I did, it was worth it... 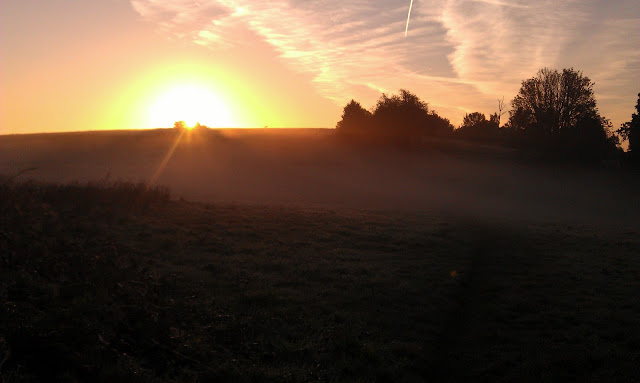 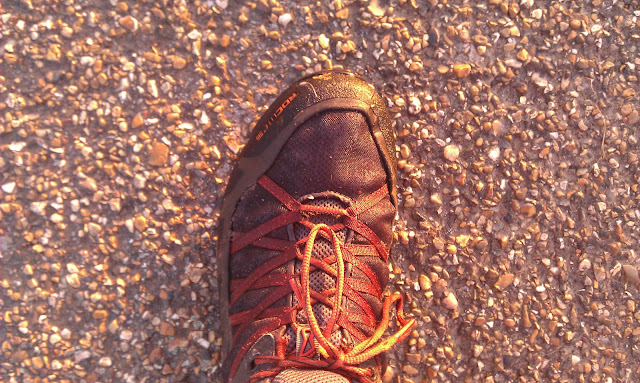 Above: running through the long wet grass meant that my feet were absolutely sodden.
Below: view from Parliament Hill 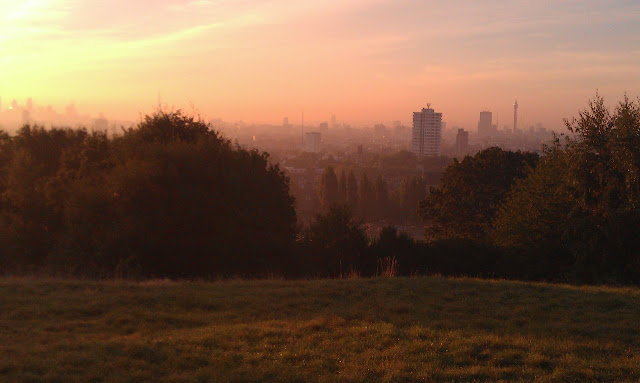 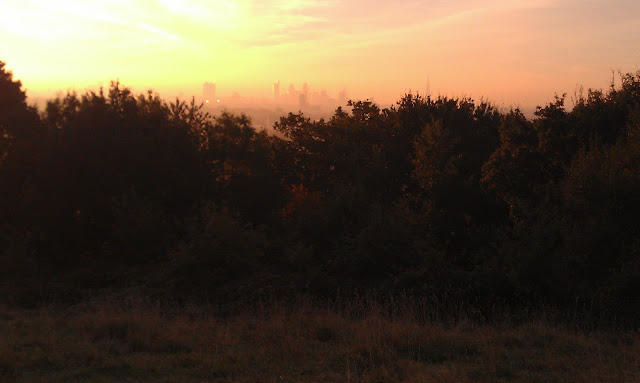 Sadly, I could feel my knee problem which gave me problems about a year ago starting to twinge. When I went for a run in the Chilterns a couple of weeks ago (at Dunstable Downs; great place for a walk or run) the knee held firm but I had a problem for several days after in my foot, possibly a trapped nerve. The foot started to hurt again, so it was time to gingerly walk back to the bike. 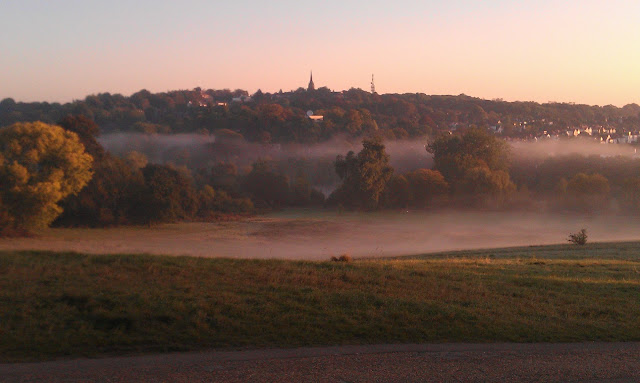 A fantastic, superlative, magical morning run. I can't recommend a morning start highly enough! As a reward for my endeavours, I was delighted to see THE BEST PLACE IN LONDON open at 0830: Louis' in Hampstead. I treated myself to a croissant and Danish pastry for breakfast and a box of cakes for later. 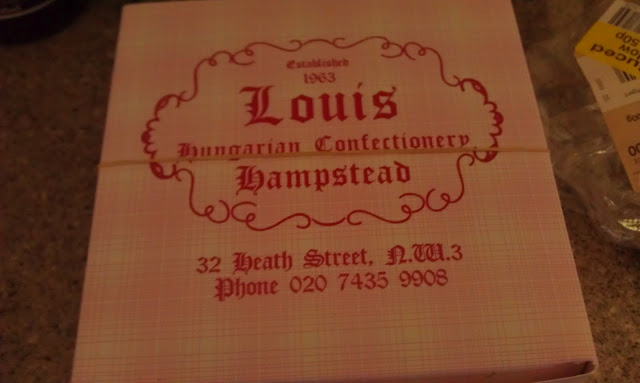 I'm blogging at The Wall!

Just a quick one. I've started up a regular blog at Haymarket's flagship social media blog, The Wall. It's very exciting for me as the Wall as always been one of my first stops for UK-based social media news and opinion.

Given my own expertise it'll have a social listening research bent but I'll probably cover quite a few topics as the mood takes me!

My posts can be found here.
at 19:37 No comments:
Email ThisBlogThis!Share to TwitterShare to FacebookShare to Pinterest
Newer Posts Older Posts Home
Subscribe to: Posts (Atom)