Camille O'Sullivan needs to behave very, very carefully. She has such power and influence over her audiences that she could corrupt even the strongest will. For now, let's be thankful that she puts her energies into creating what is, quite simply, one of the greatest shows I've ever seen, and one I felt privileged to watch the other night, which happened to be the final night of her West End run at the Apollo Theatre. I believe it was one of the last shows that Time Out awarded their legendary six stars to before abandoning that accolade; to be honest, once Camille was given the stars it would seem insulting to award an equal rating to any other show, so they might as well have retired it in her honour. 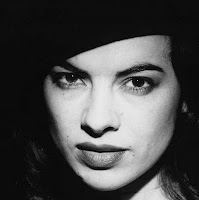 I was years behind. How could I call myself a true Edinburgh Festivalite without having seen La Clique in its glory days at the Spiegeltent (I only caught it last year at the Hippodrome) or Camille O'Sullivan at the same venue? Those days are gone - the former is onto greater things and Camille has moved up to the larger Assembly Hall in Edinburgh, via the Roundhouse in London, to the Apollo Theatre on Shaftesbury Avenue. Tickets somehow managed not to sell out, and we found ourselves with decent seats to the side of the circle.
There are countless cabaret singers out there trotting out Kurt Weill and donning corsets in a sexed up nostalgia-fest. Don't believe the hype: this isn't a sexy show. Camille isn't a glamourous performer. Sure, she's got a great figure; sure, she wears great dresses and sparkly shoes. But burlesque this is not and Camille is not a seductress. She lurches uncomfortably around the stage, with a clunky, clumsy presence and an air of self-consciousness that suggests that she's not entirely comfortable with the situation (O'Sullivan claims to suffer from stage fright every night). Neither is this a throwback to a different era; instead, the songs are timeless, taking in emotions that humans must have felt since the stone age. O'Sullivan herself cites her heroes - the likes of Jacques Brel, Tom Waits and Nick Cave - as modern day Weills.
I read some reviews again afer the gig and it transpires that much of Camille's ad libbing and throwaway charm is in fact a carefully staged act. That's by the by; it merely reinforces what an accomplished performer and entertainer she is - much like a standup comic. The audience participation, a chorus of meows, may have been done every night, but O'Sullivan's "I'll always remember this moment" was, most importantly, believable, as we were sucked into her world and drawn into her web. By the end, she was a best friend, a confidante, a lover, a shoulder to cry on, a philosopher and a story-teller. Clap? Of course I did, whooped and cheered a bit as well, but what I really wanted to do was go and give her a hug.

Camille was backed by a strong band, whose support ranged from an almost free-jazz/avant-garde classical sound to full on rock'n'roll by way of stripped-down piano simplicity. She kicked things off with a very free "My Death" which set the scene nicely, being a Jacques Brel original made popular by David Bowie. Both composers featured heavily throughout the performance. We took in plenty of Tom Waits (a wonderful "All The World Is Green", more Bowie ("Five Years"), Kirsty MacColl ("In These Shoes") and even Nine Inch Nails' Trent Reznor ("Hurt"). What all the songs have in common is a portrayal in the most poetic way of the simplest, basest, strongest human emotions. Love, hate, fear, loss, life death. Some reviews accused her of histrionics but at no point did I ever feel she was over the top.

To pick out highlights would be impossible as that would imply that there were moments of mediocrity, but spellbinding is a word that does not do justice to her performance of Dillie Keane's extraordinary "Look Mummy, No Hands" - leaving the audience a visible wreck. My own particular moment of weakness came at the start of the second half with Nick Cave's "God Is In The House" - a song of such unexpected purity (a sexy cabaret singer covers a rock star's song about...being at one with God?) that I felt the years lifted away and like a small boy again. The fishnet-stockinged legs and cheeky wine swigging belied the fact that the set was surely best summed up as a return to innocence.

O'Sullivan's most comfortable territory is with the music of Jacques Brel, who for those unfamiliar is a sort of Belgian musichall Kerouac. As well as "My Death" she took on the ballad (in the true, story-telling sense of the word: slushy it ain't) "Amsterdam", a salute to the sailors and whores of the port. And in an intimate, solo version of "Marieke" she fearlessly threw herself into French, Flemish and English with equal aplomb. But the finest moment was left until last: leaving the unlit, silent room whispering the dying "We make a little history baby, every time you come around" of Nick Cave's "Ship Song", Camille at that point revealed her power as a truly terrifying Queen of the night. At that moment, every person in the room would have embarked on genocide if she'd asked. Although I've heard that murder is arguably pardonable if the perpetrator was killing to get a ticket. "The behaviour was reasonable" say the judges.

I suppose if I had to make a comparison it would be to Bjork. There's the same extraordinary range of tones, the same clumsy stage presence, the same magic, the same intimacy. But while Bjork has always embraced new sounds and production, Camille is content to stay in a more traditional medium and exploit it to its full potential. But how inadequate are comparisons? A rather more accurate one would be to clown Slava Polunin, who similarly pulls you into his personal world and shares it with you for the duration of his show. There's another reason I compare Camille with Slava: Polunin's SnowShow happens to be the best show, of any genre, that I have seen in my entire life. (As an aside: it'll be returning to the UK in late 2011 for a tour. Just go.)

Spilling out onto Shaftesbury Avenue, into a melee of rickshaws, Trocadero flyers, queues for cashpoints and "no trainers" R&B bars, I felt pity: pity for the poor souls who think their lives are complete. For nobody's life is complete until they have experienced this girl.

Best of all? This may have been the last night of the run, but it won't be the end of Camille O'Sullivan. Luckily for us, she seems to divide her time between Britain, Ireland and Australia, so it won't be long before she's back in this country again. I'll be seeing her in Edinburgh - and maybe I'll muster the courage to give her that hug. I think she'd understand.
at 00:28
Email ThisBlogThis!Share to TwitterShare to FacebookShare to Pinterest
Labels: music, reviews