I've found myself buying quite a few bits of Montane gear in recent months, mainly thanks to some great deals from the excellent Climbers Shop (no, I don't work there!). They must have some sort of tie-in with Montane as they regularly have ex-demo stock, plus some exclusive non-standard models. It's mainly these exclusives that I've snaffled up recently.

They've all had some use now, including on the Three Peaks I did a couple of weeks ago with some work colleagues. All the Montane bits have done me proud.

I picked up the Evolution jacket (now re-renamed the Superfly once again, I believe). My trusty North Face Paclite, which had done a great job for several years, was starting to pack in so it's being retired for city use only, and I wanted something a bit more technical. The evolution was my first experience of eVent fabric. In terms of breathability it's OK, although not as amazing as everyone says: that said if it's raining it's going to be damp and sweaty anyway at the best of times. It has a mid-length cut although has a tendency to ride up at the bottom which is slightly irritating. It's also completely shapeless - pretty much straight-up-and-down which, aside from being unstylish, doesn't feel the most efficient or comfortable.

Functionality is excellent. It feels tough, and kept the very worst of the weather out - prolonged heavy rain didn't manage to penetrate anywhere. The hood is well designed with a good, stiff-but-easily-adjustable peak and the front of the jacket protects the face well when fully zipped up. I'm not so sure about the elastic adjusters but the hood feels snug and comfortable overall. Pockets are high up - climbing style - and without storm flaps, felt slightly vulnerable in heavy rain.

I picked it up for £120 which was a nice price, although RRP is double that. Plenty of outlets have it for less than £150 which seems a good bet to me. Advertised weight is 420g which is on the light side of average in its class.

Montane do make some stupidly light kit and none lighter than their windshirts. I'd never worn one before and took a punt on the special edition Featherlite-Slipstream hybrid at the Climbers Shop. Quite what the difference is between this, the Featherlite and the Slipstream I don't know - it seems to be the design of the Featherlite made with the lighter Pertex Quantum used in the Slipstream, as far as I can make out. What's a few grams between friends anyway? As expected, it's ridiculously light and packable, although it does feel rather flimsy. It got extensive use on the Three Peaks where I wore it both over a fleece (see below) and also just over a base layer. 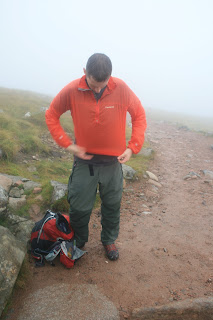 Whilst expecting the windshirt to be more breathable than a waterproof, I was slightly worried that with only a short sleeve base layer on, having the Featherlite against my skin would be sweaty. I was even more worried that I'd be irritated by the very artificial feel of the fabric against my skin - it is nasty rustly stuff. My fears were unfounded. We made a pretty brisk ascent up the Snowdon Miners' Track; I mainly just wore the base layer and just put the windshirt on when we hit the summit ridge which was, as expected, pretty blustery. It turned out to be very comfortable and I wasn't annoyed at all by the fabric against my bare skin. I think for three-season fast-paced walking my "default" will be this over a base layer, with a fleece added in colder weather. It did a reasonable job of keeping the drizzle off, as well.

The full-blown Slipstream retails for £80ish so £23 is a steal. It'll be ideal for cycling as well, hence my choice of orange (I couldn't bring myself to get a high-vis yellow one, though; that would just be too hideous in the hills).

I've never believed in spending money on fleeces. In general they're a simple, non-technical bit of kit - all you need is for it to add some warmth. OK, if I had a spare £130 I'd snap up a Patagonia R2, but in all honesty there are better things to spend £130 on. My standard midlayer had always been a 320-weight Icebreaker and there's an old cheap Tiso fleece top in the wardrobe as well. But I'd always had half an eye on Montane's Chukchi top simply because of its advertised weight - 230g, which is far lighter than competitors. There was a special edition burgundy going for £23, so I grabbed that as well. 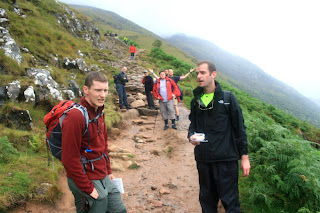 It's...exactly what you'd expect a basic fleece to be. It's just a lightweight fleece top. t's completely featureless, but that's what leads to the low weight which is exactly why I bought it. It's comfy 100-weight Polartec Micro, and that's it. I'm struggling to find anything else to say...the colour is nice. Overall verdict: I certainly wouldn't have bothered paying full price for this. Now that I've got it, I'm pleased with it and it'll start to get used more than the Icebreaker which weighs quite a bit more, but other than weight there's nothing to recommend it over a budget £15 fleece from Tiso or Field & Trek.

Another thing I've resisted paying money for is expensive walking trousers - I've had a couple of pairs of budget-label convertible walking trousers which have done me fine for years. Legs don't tend to get cold and trousers aren't heavy...what's the point in paying a hefty amount for some sort of fancy soft-shell nonsense?

I was proved very wrong by the Terra trousers (or "pants", as Montane insist on calling them...aren't they supposed to be a British company?!) Once again I picked them up for around half the retail price, and I'd have to go with the same verdict as the Chukchi, that it's just not worth paying full price when you can get a perfectly functional piece of kit for a fraction of the price.

That's where the similarity with the Chukchi ends: the Terra trousers are a very technical bit of kit. They have quite a snug cut and a syntheticy feel on the inside. At home I could feel a bit of static from them which was worrying, but this turned out not to be a problem on the hills at all. They are light, once again - advertised at 330g, and this was noticeable. I might have preferred a few extra grams for some extra pocket space, but that's a minor quibble.

The snug cut turned out not to be a hindrance at all: the Terras were very comfortable. But the performance was excellent. The weather on Ben Nevis was frustrating: the cloud base was very low, meaning that we had swirling fog and drizzle which regularly flared up into a squally shower for a few seconds before dying down again to drizzle. Time and time again I pondered waterproof trousers. Time and time again the Terra trousers showed they were meant for this very British weather. They kept the wind off brilliantly, drizzle was completely repelled and on the one occasion where a strong wind drove the rain through, the trousers dried out in minutes. Personal preference of course, but it's arguable that the waterproof trousers can stay in the pack most of the time - perhaps even in the car unless bad conditions are forecast. They're not desribed as true soft shell, although not being a soft shell advocate/expert I don't really know what constitutes soft shell these days.

It wasn't just Montane kit that was getting early use on the Three Peaks. My new Inov8 Roclite 315s got their first serious outing. Given that my regular boots (Raichle Mountain Peaks from about 2005) weigh a ton, this was pure luxury. Feet stayed secure and blister-free throughout, grip on the wet rock was adequate and after splashing through a stream they dried out impressively quickly.

Meanwhile the Osprey Hornet 32 is extremely light, but still manages to pack in an impressive amount of features. In fact, like most Osprey packs you wonder just how light they could get their packs if they shedded all the crap hanging off them. The 32 litre pack is generously sized, in fact too big for a daysack outside winter; in its favour, however, it sits nicely against the back with almost no lateral movement. As I mentioned, there are bells and whistles aplenty: two lid pockets, side pockets (although these are not a useful shape) and hip belt pockets; compression straps, hydration compatible; plenty of adjustments; even a tiny whistle. The downside is durability. The top of the lid is a flimsy mesh which has already started to give way and the overall package doesn't feel as if it'll take a thrashing.

Random post I know, and it might sound as if it was sponsored by Montane and/or the Climbers Shop (it wasn't) but it's all been money well spent. I need to start getting busy with a camera on my next outdoor trip, although that's going to be a bivvying session in the Brecon Beacons. Catching Pneumonia pretty much guaranteed...
at 18:41
Email ThisBlogThis!Share to TwitterShare to FacebookShare to Pinterest
Labels: outdoors