Just got back from a weekend in the Brecon Beacons where we experimented with bivvy bags for the first time. Both my mate Duncan and I had no experience of bivvies and tarps before so it definitely had the potential to go wrong!

We parked up near Glyntawe on Friday night, arriving around midnight, shouldered packs and headed up for about half an hour to gain some height and find a nice place to camp. There were plenty of little dips and hollows, and the terrain wasn’t too bad. 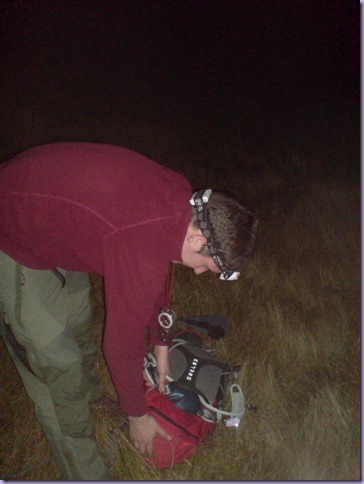 I was using a Terra Nova Competition 1 tarp which at £40 in Field & Trek and 180g represents terrific value. It’s a simple affair, with both loops and eyelets in all the corners plus halfway along each long side. Having done some internet research the only conclusion I could draw was that there was no right or wrong way to pitch a tarp, so I had a go at an A-frame setup to begin with. It wasn’t the best of starts as I realised I had left my tent pegs behind; fortunately there were plenty of rocks around, and Duncan had spare pegs as well.

It was painful progress in the dark but somehow I managed to get some sort of structure erected, and then hoped that waking in the morning I’d find the tarp still over my head. 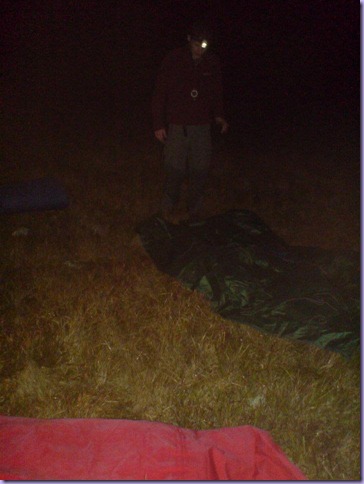 Progress was slow but steady. 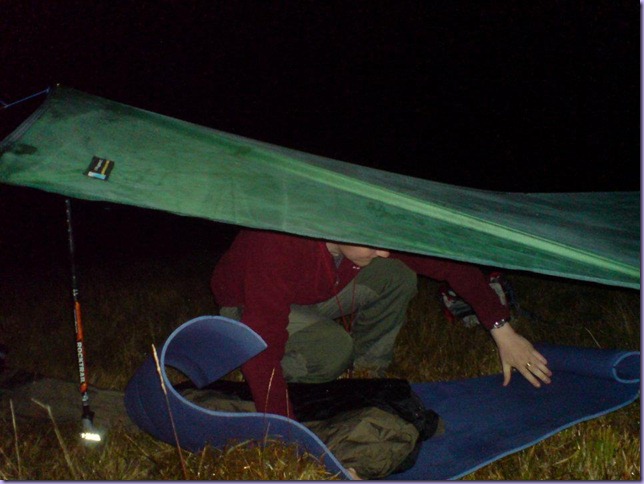 This was what I woke up to: 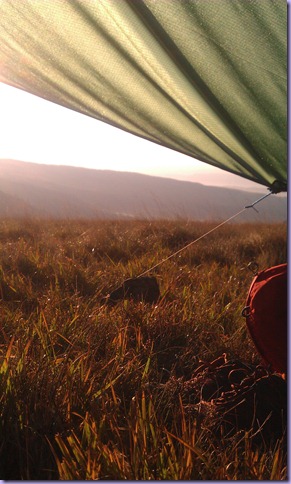 The view was nothing to shout about, but there’s a thrill about opening your eyes in the morning and getting the grass right next to your head and the wind on your face, which a tent just can’t provide. Duncan had a worse view to endure though. 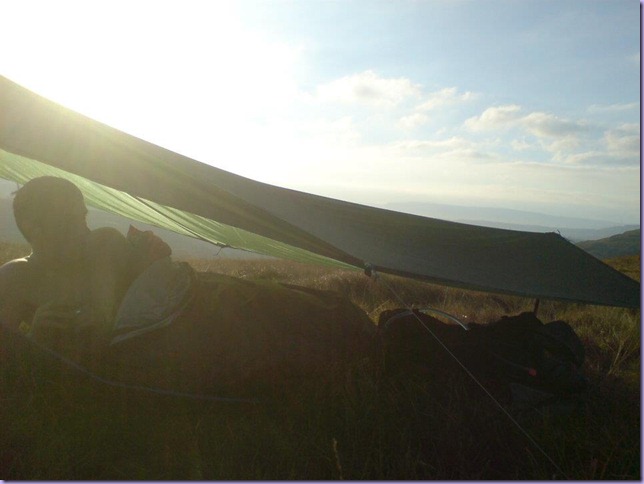 This is the life. Duncan, meanwhile, had opted for a Terra Nova Jupiter bivvy bag, which has a hoop and therefore requires no tarp. It looked like this: 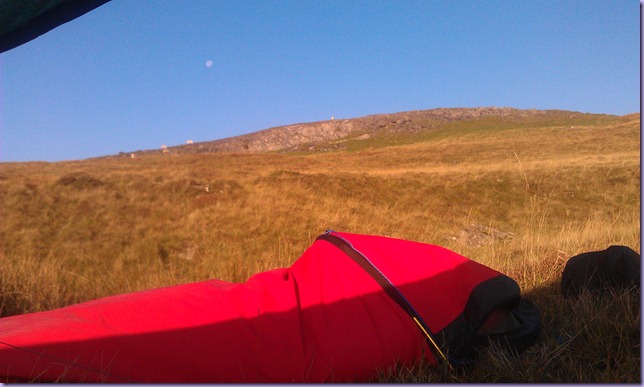 As for the tarp, my guylines were far too long, especially in the corners, which meant that it was a very flat “A” shape. No matter, not bad for a first effort, and how bloody cool does this look for a camp. 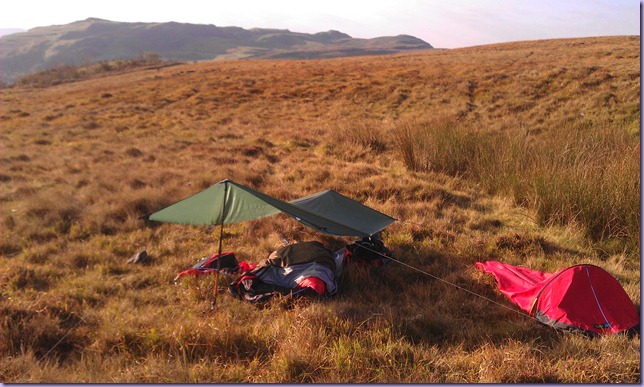 I don’t use trekking poles normally, but wasn’t creative enough to think of anything better, so reluctantly I picked up a cheap pair from Lidl. Apart from use as tarp poles they remained entirely untouched for the duration of the weekend. 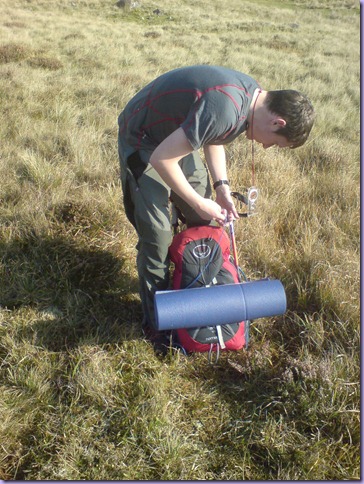 Our route was fairly short but we found a promising-looking tree under which we intended to camp, and wanted to get there before dark, so that shortened the day considerably, especially as since we didn’t get to bed until nearly 2am we’d made a late start. We crossed the Cwm Haffes, up the flank of Fan Hir, north along the top of the ridge and along to Fan Brycheiniog where the path joins the Beacons Way. Fan Hir is a dramatic walk – a perfect quarter pipe with some pretty steep cliffs at the top. 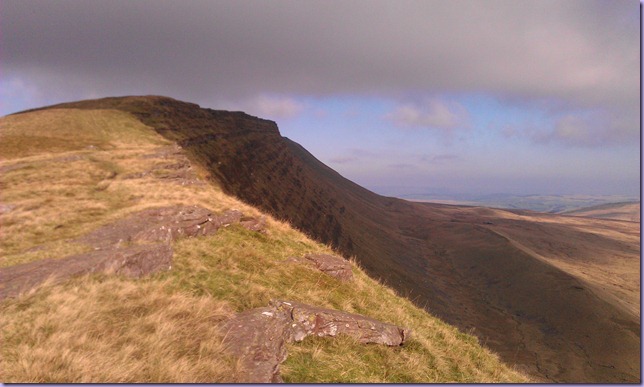 Here’s a view back at Fan Hir from the north: 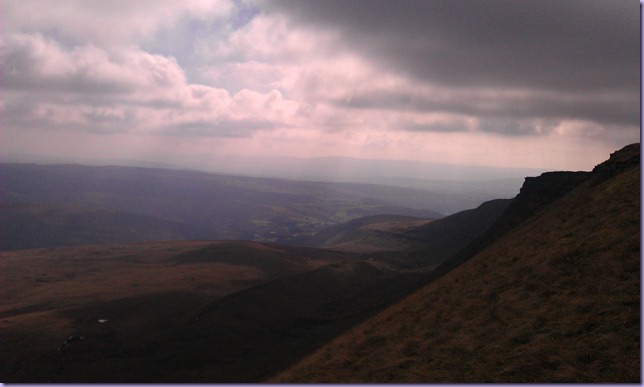 Once the path joins the Beacons Way it’s basically a flattish yomp around the edge of the plateau with some pretty spectacular views. 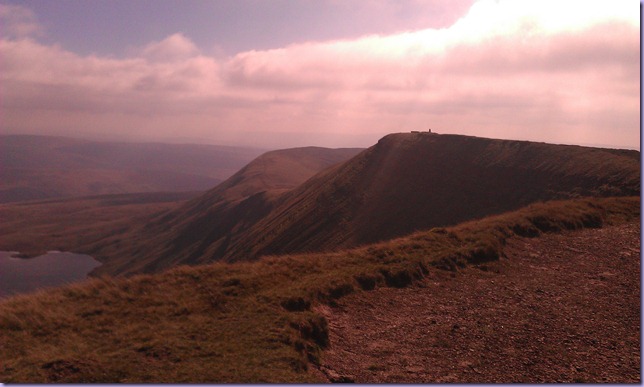 That’s looking back towards Fan Brycheiniog. The next one is looking in the other direction (westwards). 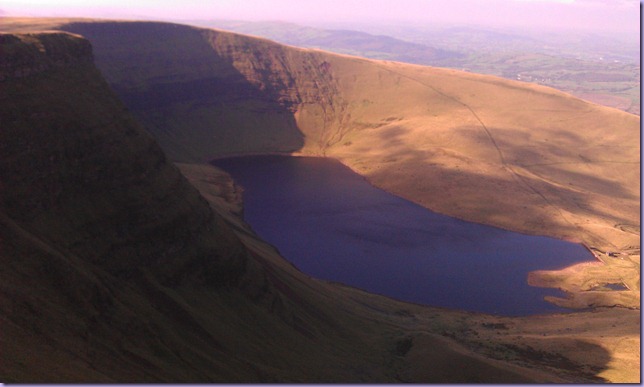 Then we cut south through some pretty boggy ground before skirting round near to where we started to pitch up our bivvies again. 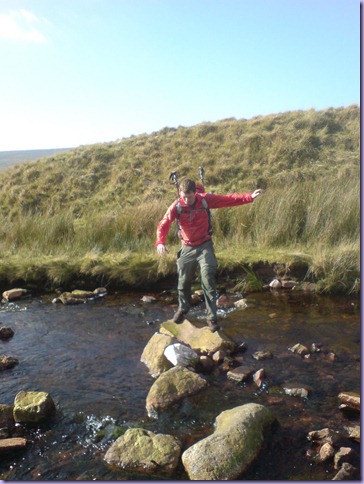 The second night, with a little more confidence, I decided to pitch a slightly tighter “A” but keep it nice and high given how calm the weather had been. 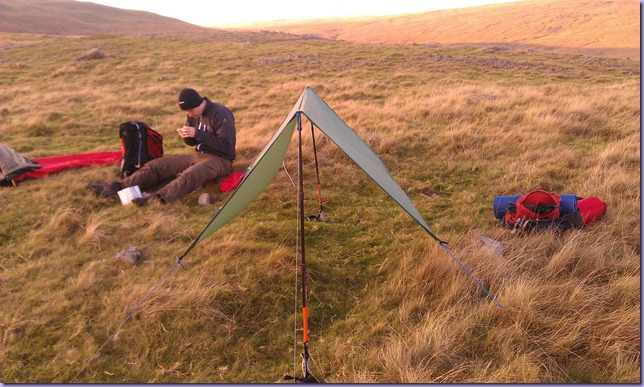 The rest of my setup was: Alpkit Pipedream 800 (which proved a touch on the warm side) inside a Rab Alpine bivvy bag. The Rab is spacious inside, has a good zip although it could do with being an inch or two longer on each side, feels durable and proved both waterproof and stayed remarkably condensation free – hardly surprising given that it’s made from eVent fabric. A foam mat (Karrimor, £3) underneath proved highly successful.

We set up and headed for the pub. Unfortunately I forgot to completely close the bivvy bag zip, so the hood of the sleeping bag was soaking with dew when we returned from the Bryn Arms. This means that my face was cold and damp for the whole night. Bivvying really teaches you discipline! By that point I was pretty cold and wet anyway: I was wearing trail shoes (Inov-8 Roclite 315) which aren’t waterproof, and didn’t bring a change of socks. There’s boggy ground all over the place, and boots would probably have been a better idea, perhaps we got a little carried away by the minimalist ethic.

The two bivvying systems are very different. The Jupiter is a self-contained sleeping system – not needing a separate tarp means (1) you save a little bit of weight and (2) there’s no risk of the tarp bowing away in the night. On the down side, Duncan reported that is was VERY snug inside (he’s 6 feet and was using a Pipedream 600 sleeping bag), there’s nowhere to keep your rucksack dry, and getting in and out of the bivvy bag in bad weather would be a horribly uncomfortable experience; needing a pee at 3am in freezing rain wouldn’t be one of life’s greater moments (by contrast I did a pee on my knees from my sleeping mat, but maybe that’s too much information). Tarps, meanwhile, are versatile, although you’ve got to be careful to try and keep the weight down to around a kilo for tarp + bivvy, because you’re already in lightweight tent territory there. The exhilaration of sleeping truly out in the open definitely gives the bivvy bag some extra utility though. Does life get any better than this…? 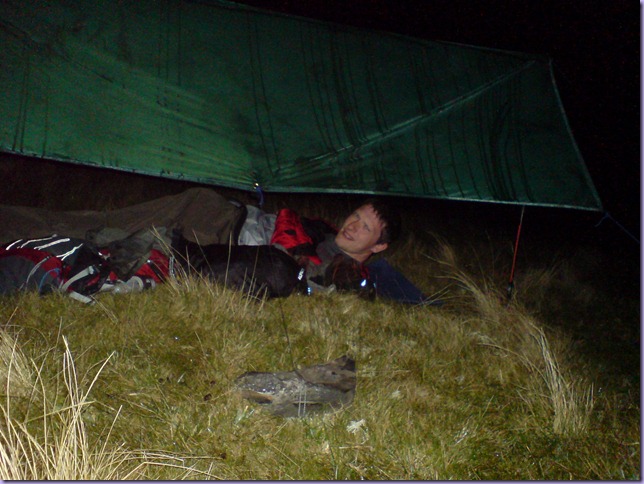 We had had incredible weather over the course of the day for mid-October, but the rain set in overnight and the breeze picked up. I spent most of the night worrying about the stability of my novice tarp pitch. There’s a hell of a lot of noise from it flapping around, too. In the event, however, the tarp stood firm (in future I’ll pitch it a lot lower) and this was how it looked in the morning (wind’s coming from the left): 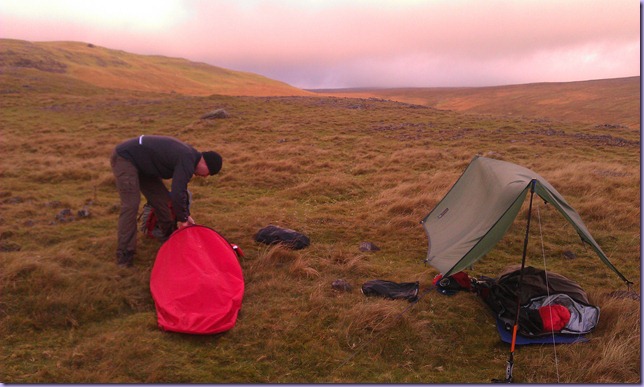 Life couldn’t get much better, really, although bivvying does alter your definitions of comfort somewhat. Sleeping in a zipped up bivvy bag isn’t the most comfortable experience and temperature regulation is tricky, but the freedom and rawness of the camping more than makes up for it. Going minimalist definitely does have its kicks – all my kit was stuffed into a 32 litre bag. Not something to try in bad weather though! 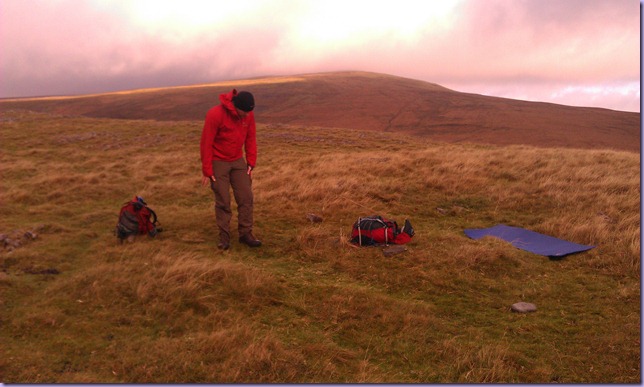 at 19:43
Email ThisBlogThis!Share to TwitterShare to FacebookShare to Pinterest
Labels: outdoors