I picked up a Now TV box the other day. At a tenner including postage, they're practically giving them away. Some first impressions:

Firstly, given the price, there's obviously a catch, which in this case is "Sky by stealth". We've never had any sort of Sky product, so now they have our contact details plus viewing habits via the box, which is presumably worth the cost of subsidising the box alone. It's also very firmly squared at tempting viewers into premium Sky packages (sport and movies).

But the fact there was a catch was obvious, and it doesn't detract from the product itself. So how does it hold up?

The box itself is small, unobtrusive and simple to set up. Getting started out-of-the-box iss a matter of minutes. Yes, you'll need to have wifi and a HDMI port in your TV, but most people will have those these days. The only slightly finicky thing about setup is that you need to have a "NOW TV account" which is different from the details you give Sky when ordering the box itself. I may be wrong, but it seems to create an account you either need to order a Sky Sports Day Pass (£10) or sign up for a month's free trial of Sky Movies. I opted for the latter and got as far as this screen: 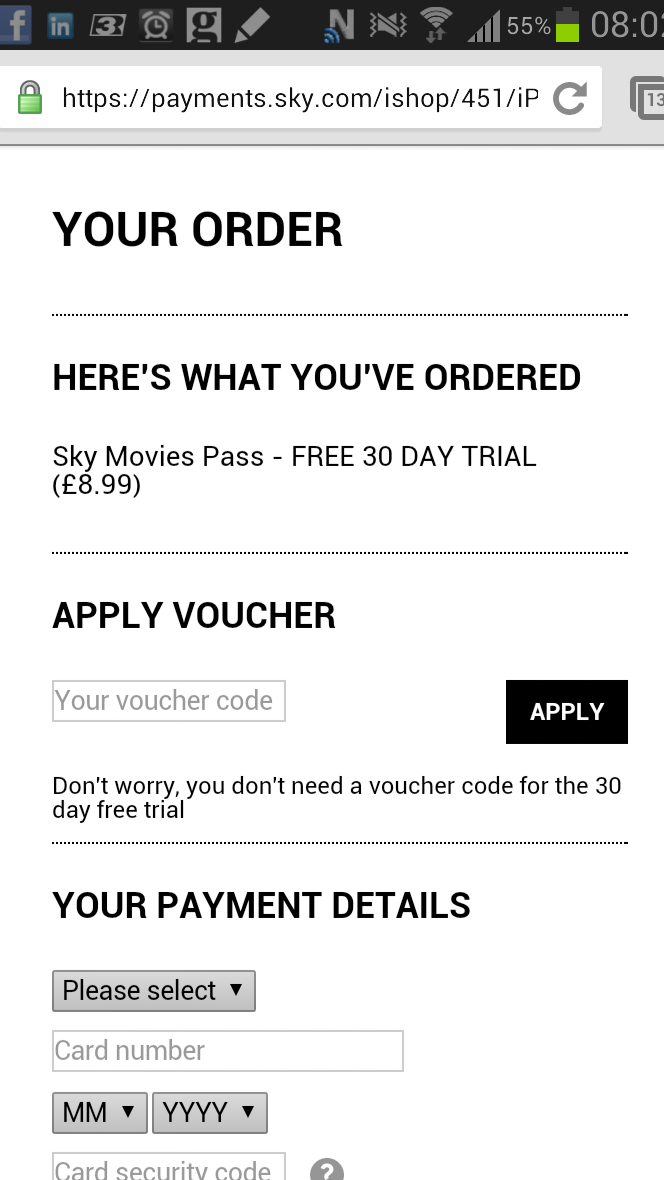 Functionality itself is pretty limited but has one major strength, namely the ability to get iPlayer onto a non-smart TV. This in itself is the main benefit and makes it worth the price. There's also Channel 5 on demand; apparently ITV and Channel 4 are in the pipeline, which would be nice.

There are other apps - most of which are pretty pointless, although being able to watch TED talks on TV is quite cool. In addition, for non-smart TV owners like me, there's no obvious way to download films to a TV, so the fact that Sky have sneaked in there with a cheap box means that if I want to download a film, I may just go with Sky's NOW TV service, purely for convenience.

Vimeo is included but YouTube is not, which is a major drawback. I'll also have to wait for Google to release their Chromecast before I'll be able to watch BT Sport on the TV rather than the laptop, which is irritating. So for the moment I'm thinking of it as an iPlayer-only device.

However, the ability to buy a Sky Sports day pass is a major attraction for me. Priced at a tenner, it's teasingly affordable compared to the £40-odd I'd need to shell out for a full-blown subscription. Previously, the day passes were only available via my PC, so I may well pay for the occasional day watching the Ashes, Ryder Cup, Heineken Cup or similar. So Sky are likely to take some of my money which they otherwise wouldn't have had. It's clever marketing, in a way that both Sky and the customer are winners in their own way.

Overall: don't be fooled into thinking this is some sort of all-singing all-dancing device; it's just a way to get iPlayer onto your TV if you can't do it already. But for that alone, the giveaway price is worth it, and having the technology in place to allow you to get bite-sized versions of Sky premium products (ie sports and movies), combined with the simplicity of the product itself, make it a thumbs up from me.
at 19:24
Email ThisBlogThis!Share to TwitterShare to FacebookShare to Pinterest
Labels: reviews